It’s September in the alps.  Leaves are starting to turn and there is a cool undercurrent to the breeze, even though it’s unseasonably warm.  I’m looking across the narrow valley to a waterfall on the other side, and I can hear the river below.  In a couple of months, the waterfall will freeze over and the couloir will eventually turn into an avalanche chute.  I can hear the grasshoppers all around me, so loud, so late in the season.  I’m sitting under our plum tree, a kind of plum we don’t have in the States (or at least I never heard of them), but we had a small tree of them in our yard in Germany.  They’re called mirabellen in German, and the french word for them is similar.  This variety is called Reine Claude, which means Queen Claude (and thus I learn one more word of French).  The plums fall all day, and since the neighbor behind us keeps hives at his house, the bees are swarming here.  A bee just fell out of the tree above me and landed on my left boob.  It just sat there and stared at me — I think it was drunk on rotting plums.

We are overflowing with plums, and this afternoon we’re making plum marmalade, but not with our own plums.  Our neighbor to the side has a plum tree as well and she gave us a kilo of plums this morning.  So we sat down outside on the terrace to pit them and then drove down the valley to the grocery store to buy some canning jars since ours didn’t make the cut when we packed.  It took a while to finish pitting them because they’re a very old variety, some of them as small as grapes, and they don’t release the pit easily. I have orange fingers now.

We also saw her go down the hill to Jean Noel’s house with another bucket of plums; she came back with three eggs.  This is interesting because Jean Noel doesn’t keep chickens, but he has crates and crates of potatoes that he harvested this year.  So we deduce that somewhere along the way, Jean Noel has traded some potatoes for eggs, and has now traded eggs for plums.  We have a real miniature barter economy going on here.  And apparently the exchange rate for plums is pretty bad at the moment, since we all have plums.  Many plums = 3 eggs.

So those of you who have been following this adventure have probably noticed the 2+ month gap since I last posted, during which we opened a restaurant.  I’m sure you’re dying to know how it went.  It’s not that I didn’t want to post; sometimes things started writing themselves in my head but I was never near a computer or a phone to get them down.  What I can say is that it is the hardest work that I have ever done, for the most hours.   It’s going to be difficult to describe how much I learned in the space of eight weeks.  But it’s le fin de saison and I’m spending my days doing not much of anything, not that there isn’t anything to do — because literally nothing got done for two months besides cooking galettes and crepes.  Or I’m doing things like making marmalade.  And laundry, lots of laundry. 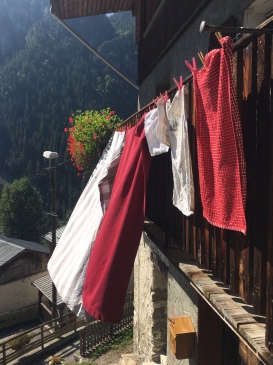